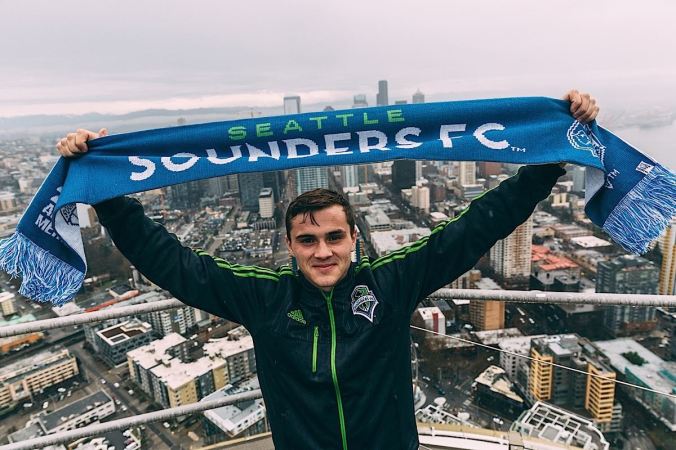 I don’t think I’m the only one who is excited to see this guy in Rave Green.

With their first preseason game tomorrow, the Seattle Sounders are ready to kick off 2016 after a relatively busy offseason. 2015 was an up-and-down year for Seattle soccer fans. At times the club looked like the best in the MLS, led by the dynamic duo of Obafemi Martins and Clint Dempsey. However, during periods where one or both of those two are injured or away on international duty, goals and victories were hard to come by – the team only won a single match between June 16 and August 9. Much of that was because of lack of quality depth in areas in the team, so improving that was obviously a huge focus for this past offseason. The other emphasis was more of a youth movement and making the team younger.

While most of the core players from the past remain intact, there are some notable changes to this year’s squad. I thought it would be helpful to introduce each of the new faces and how they look to impact the Sounders this season. Here are all of the new players (with highlights), in alphabetical order:

Selected with the seventh pick of the second round (27th overall) in the 2016 MLS SuperDraft, Tony Alfaro is a technically-gifted center back out of Cal State Dominguez Hills. At 6’2″ and 190 lbs., he has a great left foot and is someone who can begin a counter attack with a long ball. Alfaro likely won’t see very much first-team time this season with the more experienced depth ahead of him, but he could be a a big part of the club’s future. For now he will develop with Sounders 2 (S2), where he and the staff can determine whether he projects better as a center back or outside back.

A third round pick in the MLS SuperDraft, Emir Alihodzic is a Bosnian midfielder out of Nebraska-Omaha. From what I’ve seen, he seems to have a good work rate and can hit a long ball. This is another player that projects as an S2 development with the potential of eventually being worked into the first-team.

After training with the club prior to the 2015 season, Michael Farfan joins the Sounders in 2016 hoping to shore up the first-team midfield. A former MLS All-Star, he spent last year with D.C. United and before that was a member of the Philadelphia Union. One of the best qualities of Farfan is the fact that he is versatile, so he should definitely factor in the first-team rotation. Here is a highlight of a chip goal he had with the Union in a friendly against Real Madrid.

A 24-year-old left back out of Trinidad and Tobago, Joevin Jones came over from the Chicago Fire in exchange for the Sounders’ first round pick this year. Jones is a talented and speedy outside back who should immediately compete for a starting role this season. He is also a player with international experience, debuting for Trinidad and Tobago back in 2010. There’s been comparisons to former Sounder DeAndre Yedlin, so take that for what it’s worth. Either way, his pace on the left side combined with Tyrone Mears‘s  pace from the right side makes this team’s offensive potential even more dangerous.

Zach Mathers was drafted by Seattle in the second round of the 2016 MLS SuperDraft. As a senior at Duke, Mathers led the Blue Devils with eight goals and eight assists. While he does have scoring potential, he projects as more of a holding midfielder with solid technical skills. This is yet another player who will likely start with S2 and hopefully earn his way onto the first-team at some point.

Signed to the most lucrative homegrown contract in MLS history, Jordan Morris comes back to Seattle with enormous expectations. There was much debate about whether Morris would sign with his academy team following his decision to train with German club Werder Bremen. After leading Stanford to a national championship in 2015 and debuting for the Men’s National Team, the forward from Mercer Island is considered the next great U.S. player and he will immediately play a huge role in the Sounders’ forward rotation. There’s little doubt he will be extremely successful as long as he continues to work hard and not get caught up in his hype.

With the 76th pick in the 2016 MLS SuperDraft, the Sounders selected Michael Nelson out of Old Dominion. Nelson was an all-conference center back in college after being highly recruited out of high school. I could not find any highlights of his, but he also will be in the mix as an S2 player.

Another homegrown talent, Jordan Schweitzer signed with the Sounders just last month after a successful career at the University of Denver. Schweitzer hails from Everett, Washington and will probably start at S2 with a chance to see some first-team action sometime this season. He is a talented, distributing defensive midfielder who will continue to develop in the Sounders system.

All of the draft picks remained unsigned, but that will likely change fairly soon. Another player who could join the mix is Panamanian center back Roberto Chen, who just arrived at training camp this week. If all goes well, expect to see Chen signed next week or the week after.

It will be interesting to see how each of these new players factors into Seattle’s plans this year and beyond. One thing is for sure: it’s a talented and youthful bunch. Less than a month until CCL play and just over a month until MLS play. Go Sounders!